Length: One sizeable cup of tea, and a good dunking biscuit (+ additional time after for mulling it over).

Summary: Unequal prizes are a problem, why, and how we might fix it.

Before I start,  I’d like to express that nothing I have written undermines my gratitude to event organisers who volunteer their time to put on these events. It’s a huge amount of hard work. I love participating and am very grateful to those who make the season happen.

Last Sunday, Pea Royd Lane in Stocksbridge saw the culmination of hill climb season for 2018. Hill climbs are a niche within a niche, and have had the nation’s club cyclists, and a spattering of pros or ex-pros, taking to many of the UK’s best hills to see who’s fastest. With almost a year until the madness starts again, now seems like a good time to consider what we might want to change. For some it’ll be a commitment to train harder, others might purchase some coveted hill climb wheels, but I’m thinking about bigger changes. Changes which make the events more equal. There are few women at these events, and despite a significant rise in female participation in our local league, women represent ~20% of the field at best. It’s easy to feel like you don’t really belong. Individual clubs organise the events, and setting prizes is at their discretion. This season it was polarized. There was evidence of change with a couple of organisers trailblazing towards entirely equal prize money across all categories.  At the other end of the spectrum, one event saw women receive £1 for every £7.50 awarded to a male competitor.

Post Nationals in 2017, Hill climbing is a brutal sport

I looked a little further afield to get a bigger picture. It turned out that in the grand scheme of things, our league wasn’t doing so badly. Catford and Bec are two of the most popular hill climbs in the British calendar. Crowds gather to watch cyclists turn themselves inside out to reach the top as fast as possible. Bar tape is a rare species and an unnecessary luxury on such days. Equal prizes are also uncommon. At Bec hill climb the winning woman took home less prize money than that of the 3rd placed male, and less than half that of the winning male. The women’s prizes were equal to the male sub-categories of veterans, juniors and juveniles, and no (specific) women’s sub categories were awarded (see image below). 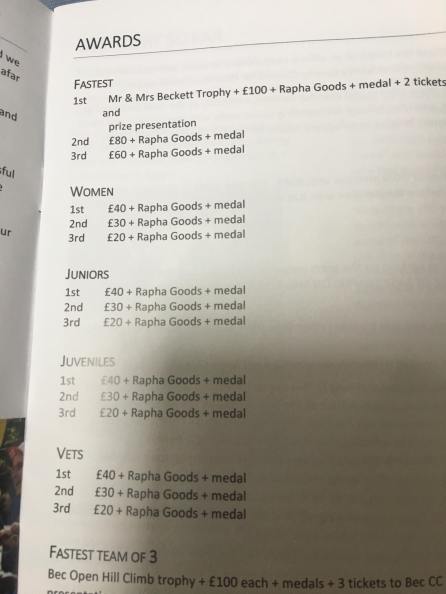 The point might be made that the veteran prizes, for example, do not specify a gender and are therefore open to women.  In the case of Bec, men won all of the junior and veteran prizes, with a female taking the 3rd juvenile prize – that’s 1/9. My view is that a performance based prize in cycling is a men’s prize whenever there is significant male participation. There’s a reason why men and women compete separately in professional cycling. It’s not a level playing field. Men are stronger by nature, and with hill climb outcomes determined largely by watts per kilo, they’re going to win. I’d argue that’s a poor reason for not celebrating women’s cycling equally.  Course record prizes are particularly frustrating in this respect and I would urge any organisers including a men’s course record prize (N.b. It doesn’t matter if you call this the overall course record prize) to include an equivalent women’s prize. Calling it an overall prize suggests that women’s racing is sub-standard men’s racing and that if women are good enough, they should be in contention for these prizes too. I think that’s bonkers, but I also think organisers who continue to offer these prizes perhaps haven’t thought about the message it sends to women.

Prizes aren’t the only place where this is an issue. Cycling weekly recently published this article on the course change for the national hill climb. The last couple of sentences bother me. “Pea Royd Lane, which is just over 1km long at an average gradient of 12%, has hosted the National Hill Climb championship on two occasions in the past, in 2009 and 2014. When it was won by Dan Fleeman and current National Hill Climb Champion Dan Evans respectively. Evans’s Strava KOM from the day still stands.”  It’s as if there was no women’s competition, but there was. Cycling Weekly appears to have forgotten. The sentence should read:  “In 2009 it was won by Dan Fleeman and Anna Fischer, and in 2014 by Dan Evans and Maryka Sennema – both of their times still holding the KOM and QOM for the segment on Strava.” 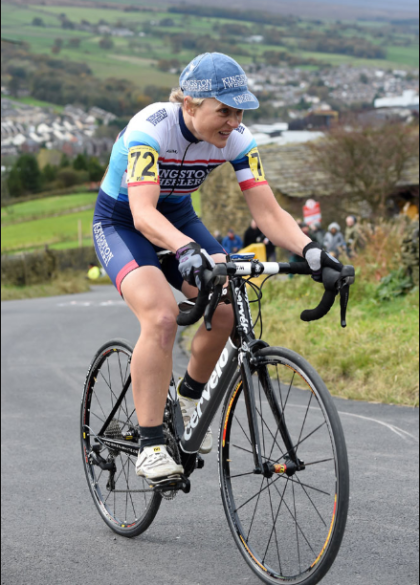 There was another thing about the Bec event which surprised me. It was sponsored by Rapha. The same Rapha which promotes women’s cycling and who organise “Women’s 100” rides across the country.  It surprised me that they supported an event with such a disparity, and made me wonder whether we need to speak up about these issues. I don’t believe (based on their ethos) they’d be actively supporting inequality.

They aren’t the only sponsors who I’m at issue with. Catford is another huge event, and this year it was sponsored by Cyclist magazine, Katusha, and Hunt. The fastest male at the event received £300, plus a host of additional prizes (see image below). By comparison, the fastest female received £75. Men’s prizes went down to 4th, but there’s no mention of women beyond the 1st woman, and 1st veteran woman. As with the Bec event, there’s an overall team prize, this year won by three men from Rapha CC.  Totting up the prize money; £600 is for men, £100 for women. Additionally, if the fastest male were to have broken the 1983 course record, they would have received a set of Hunt sub-kilo wheels – worth around £1000. There’s no mention of what the women’s course record is, and there’s clearly no prize if a woman were to have broken it. Again, I think this looks poor for Hunt, and also for the other sponsors. On the day, the course record stood strong, but the incentive, and the prestige, were there.

The prize list from the Catford Hill climb in 2018

The Catford hill climb dates back to 1887. In part, I think the historic nature of these events are the root of their inequality today.  Women’s participation in sports, and in cycling in particular, has grown hugely over recent years, and likely unimaginably since Catford CC first organised a hill climb. It wasn’t until 1999 that women were first allowed to participate at the national hill climb – the pinnacle of the hill-climb calendar.  However, whilst a huge amount has changed since the first hill climbs, and we’re no longer riding penny-farthings uphill (this really did happen), it seems the approach to women’s cycling has not changed as much as we’d like.  After having this and similar discussions with increasing frequency over the past weeks I’m fully aware that not everyone shares my views. Here are some reasons why women’s prizes matter, and some of my responses to the FAQs around women’s participation.

But there are fewer women, so the competition is easier for them…?

There are, and less women competing gets raised frequently as an argument for keeping the status quo.

I’d like to recognise that there are far fewer women in road cycling (and cycling as a whole) than men. I think it’s a symptom of greater gender inequality in the UK, and indicative of more systemic issues which I would also love to discuss but would make this a much longer blog. Judging by popular strava segments, I estimate that there are around 10% the number of serious (you use strava) female road (you use strava on a road segment) cyclists as there are male. As such, we’re many years away from having equal (by number) fields at these events, and I’d suggest a field which is more than 10% female is doing well.

That doesn’t mean that the women’s race isn’t valid and shouldn’t be separately celebrated from the men’s. I also think women are less inclined to participate in these events if they don’t think they’re very good at hill climbs and, as such, I’d argue that often the competition whilst less numerous, can still be fierce. So far this season I’ve competed against three riders who have also competed or still compete for Great Britain.

Why do the prizes matter? Is it about the money?

It’s not just about money. The importance of the prizes goes far beyond potentially earning back your entry fee and perhaps covering your petrol if you’re lucky. Awarding a prize is recognition of an achievement, and validation of women’s racing.

What comes first, participation or prizes?

Prizes encourage participation. I can’t count the number of times I’ve heard the argument that not enough women enter so a prize isn’t needed.  If you want to contribute towards increasing gender equality in cycling, providing a women’s prize is a great incentive.  Winning a prize or being able to simply share that all important brown envelope photo on social media after an event says something important. It recognises achievement.

To go back to the Catford example – Catford had 6 women enter in a field of 130, or 4.6% of participants. The University of Bristol (UoB) Belmont Hill Climb had 20 women entered in a field of 118, or ~17%. The UoB event had fully equal prize money, including a team prize for women. Some have argued that you should wait for women to participate, then add prizes to celebrate them as a follow on. Putting the prize in place allows you to include women in the often shared event photos or race reports, validating their participation, celebrating their achievements, and above all making them feel welcome. It goes the other way too – I’ve participated in events this season where I’ve made it to what would otherwise have been a women’s podium but which went without prizes or recognition. It made my achievement feel less valid. 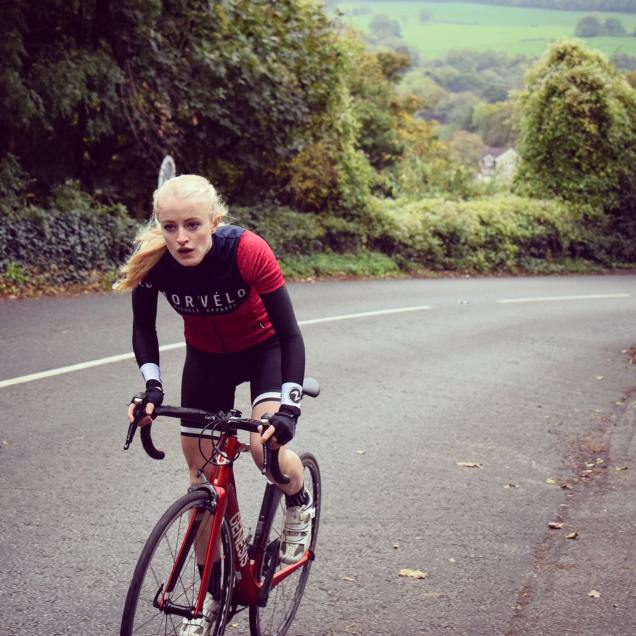 Perhaps it’s also worth thinking about the worst case scenario, which I think is pretty good. Say you put on your hill climb event this year, offer women’s prizes for all the categories you provide men’s and don’t get entries in some of them. What happens? Say you offer a junior women’s prize, and it’s not claimed – no junior women entered. The club gets to keep its cash. However, next year when women are looking at event information, they might be tempted to enter, they might have heard of it, or they might recommend it to someone. It could change how other women view your club. It says “we as a club care about women’s participation”. Perhaps you’ll end up with more female members down the line. At the worst you don’t, but you’ve made an effort and you’re no worse off for it. Not bad.

What can we do?

There are events which are making progress, I mentioned the local UOBCC event which is entirely equal in prizes. Others moving in that direction include big events like the Porlock Hill Climb, the Chard Wheelers event on the Chineway, and Monsall Head. I’m also delighted that our local hill-climb series has announced a women’s team prize for next year, following on from providing a women’s podium for the series last year. Positive change is happening, here’s how we keep it going:

I want equal prize money at these events to no longer be the exception, or be a story. I’d like it to be the norm.

* I’ve sent this article to Rapha, Hunt and Cycling Weekly who I’ve mentioned – and I’ll update this if I hear anything from them! – UPDATE: See the article “Hill Climb Season: This Year It Will Be Different” for responses from Hunt, Rapha and Cycling Weekly.